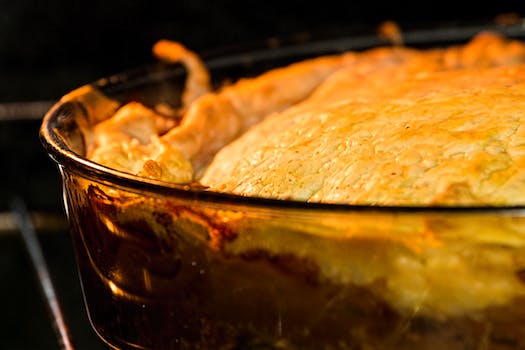 A shepherd herds and manages sheep, usually to raise them for eventual sale in a meat market. For sheep, which often means from their pencil to a field of grass where they graze. Therefore, the shepherd shepherds the sheep into the area from their pencil.

A pie consists of pastry formed into a bowl which will have a staple food product which the baker chooses (meat, vegetables, or fruit). With that done, the product could be called something other than a pie. When the baker adds a pastry cover (top or lid) then bakes his or her invention, he or she has baked pie. While accurate, if the baker chooses to use mutton, the name shepherd’s pie applies to some edible food shepherded into the pastry bowl.

You know the name for prepared food products that were not all consumed: leftovers. Shepherd’s pie, a freshly-baked demonstration of kitchen leftovers, provides a baker with an array of opportunity to spruce up an otherwise B list meal while functionally clearing the refrigerator of older, yet useable food before it spoils. I have seen the title”cowboy’s pie.” A pie will consume (taste) the same if the name changes; the pie itself stays the same. Cowboys herd cattle, as shepherds herd sheep. Some anglers herd fish into a trap, so you might have fisherman’s pie if you wish, and you probably should call it that if you baked leftover fish in your pie.

Speaking of cows, western Americans prefer the title cattle, and they detest the term boy when referring to their tradition of herding cattle. They like cattlemen better. Cattlemen’s pie works then, doesn’t it? Additionally, it sounds better than cowboy’s pie. Probably, we should let go there, since cattlemen do not usually herd cows, which live in barns, create dairy products, and make little cows (calves).

Cattlemen herd steers to the meat industry. Steers, young castrated bulls, must be consumed until they become oxen (massive feed-consuming beasts once used to haul heavy burdens in carts). We don’t need oxen anymore since we have trucks to haul heavy burdens. If you like to eat beef and hamburger, then you understand the usage of steers. However, you probably don’t need to think about a pie made with leftover castrated bulls. Food and Opossum Poop dont mix.